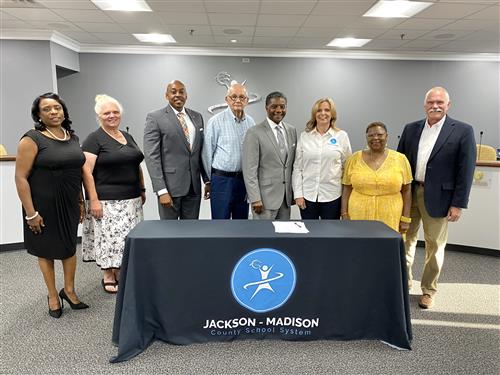 “I thought the comments that he made were very offensive, and I was personally offended because I teach in a school of education. I did not appreciate what he had to say,” Board member Dr. Ken Newman said.

Recent comments by Mr. Arnn, and past derogatory comments concerning minorities, are especially concerning to local Board members as a Hillsdale-sponsored charter school makes efforts to assist Governor Bill Lee in bringing charter schools to Jackson-Madison County and throughout Tennessee.

“Those particular comments should not have been made against any teacher. To say teachers aren’t educated enough to teach is not a comment anyone should have made,” Board member Janice Hampton said.

The resolution in support of teachers was one of two resolutions adopted by the JMCSS Board. An additional resolution was adopted to deny the amended charter school application from American Classical Education, Inc.

“People at-large don’t understand how difficult the job of teaching is. Everything that the charter school supporters want to offer, we’re already offering it. I don’t see a need to duplicate those efforts,” said Board member Scott Gatlin.

Both resolutions will be shared with local and state officials to further strengthen the school system’s position concerning efforts by American Classical Education, Inc., and its partner institution, Hillsdale College.

The Board vote was 8-0-1 with one member absent.